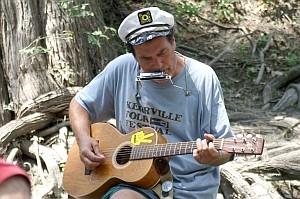 Learn more about the many facets of MrHabitat: 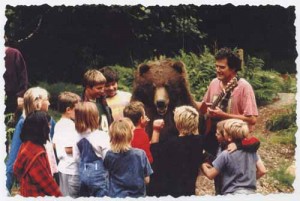 Smokey Bear meets Chuck Berry
I was born July 12, 1948, in St. Louis, Missouri. “imprinting” on the Mississippi River. After St. Louis and Little Rock, Arkansas, we moved to Houston, Texas, where I began playing guitar in third grade. My favorite place was the neighborhood ditch, where I took my guitar and Mark Twain books, and imagined the ditch was the Mississippi River. In Junior and Senior High school I played in “garage bands,” church camps, learning a mix of rock’n’roll and folk songs. I also liked Scouting, camping and hiking in East Texas forests and the Texas Hill Country. I wanted to be a Forest Ranger and play music: Smokey Bear and Chuck Berry! We moved to Western Pennsylvania in my last year of High School, where I drove my parents nuts with an electric guitar in the basement. A high point was opening for the Beatles, (well, actually a Beatles’ movie). 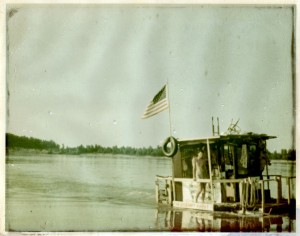 Huckleberry Finn goes to Texas
In 1966-68 I “attended” the University of Texas at Arlington, worked at a TV station in Dallas, joined a band, and hitch-hiked a lot. “Folk-Rock” was the music, and I started writing songs in earnest, mostly on acoustic guitar. With band-mate A. Glenn Myers I rafted the Mississippi River in the summer of ’68, a major ” watershed event.” The adventure had an immediate effect: I was soon called for two years in the US Army, serving in Seattle and Vietnam, where I traveled as a “singing Food Inspector!” 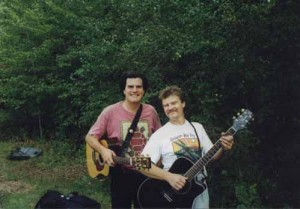 Environmental Troubadours
I wound up in Austin, Texas by the mid-70s, with adventures in Arizona, Maryland, and Ohio. By the early 80s I had many Community College hours, inspired by the biology deptartment and local enthusiasts to write “Habitat” and other songs for the growing environmental movement. The multi-talented Glen Waldeck and I teamed up and began performing for events, schools, honky tonks and festivals. We played together for years as the “Environmental Troubadours,” dubbed by TIME Magazine, November, 1989. Between us we produced seven albums, several videos, and countless campfires. Our music took us around the US and beyond, with highlights in Alaska, Hawaii, & Japan. 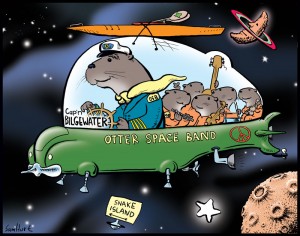 Welcome to Otter Space
For the last ten years I’ve been busy with solo shows and the all star Otter Space Band. Our album “Friend of the River,” relates to my love of the Texas River School in Austin, and river events elsewhere. I’m still a “travelin’ troubadour,” but sticking closer to home. I’m honored to be listed in the Texas Commission on the Arts “Touring Roster.” In Austin I produce two festivals for youngsters and families: “Mother Earth Day at the Springs” a concert and eco-fair in May at Barton Springs, and “Lady Bird Lake Fest,” both sponsored by the City of Austin and others. Future Otter Space projects include river trips, recordings, and fun-filled musical adventures. Stay tuned!